i don’t fear the black man

In November, OCRA Montalcino hosts a series of events related to the theme of migration and integration methods, with a particular focus on local issues and testimonies from nationwide renowned speakers. The aim is not only to dialogue but to act with ethics and empathy, intelligence and solidarity, to change borders into places that asylum seekers cross to enter our country as a place to stay. 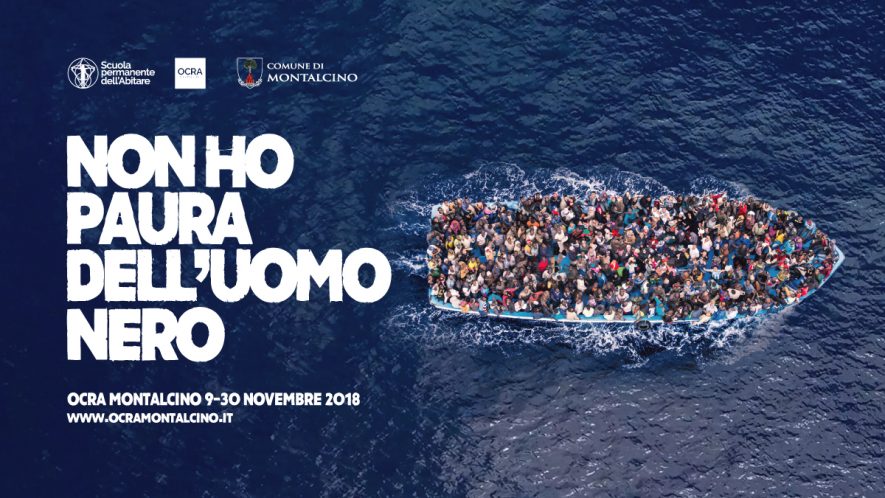 “When we talk about immigration from Africa, we should stop the struggle between instinct and emotion and be rational. Immigration is indeed an issue, but it is an issue that can be dealt with seriously. Those who only listen to their hearts end up being Salvini’s best allies.” Mario Raffaeli, President of Amref Health Italia

We were developing the programme of “I don’t fear the black man” when, on 24 September, the Council of Ministers approved the decree law on “security and immigration”, which in fact dismantled the SPRAR System (protection system for asylum seekers and refugees). A week later, on 2 October, the mayor of Riace, Domenico Lucano, was arrested. These are just two of the many worrying incidents where collective and individual rights were denied and which strengthened our motivation for proposing a series of events aimed at reflecting on and fighting the increasingly widespread fear. When recalling the founding values of Europe based on the motto “Freedom, equality and brotherhood”, well-known German director Wim Wenders emphasized that the motto was being replaced by the nationalist slogan “oppression, exclusion and hostility”. Many public and political figures are reporting the remorseless rise of populist and xenophobic groups, both in Italy and Europe.

We believe that we are living in an important moment in the history of our country and that it is necessary to express a strong and resolute common thought that starts dealing with small local issues and then grows to change the course of events. In Italy, there are many local groups that experience hospitality and integration, associations that educate people about the importance of legality, their work being based on the idea of equality. We believe that it is very important that people develop awareness of their responsibility towards the community in a country that for years has been affected by corrupt politics and widespread hostility, where not even the youngest people realize that thoughts are the driving force of political action. For this reason, the reflection and discussion will involve young Italians and foreigners, essential threads of the weft of the social fabric of the future.

The event includes a series of meetings, conferences, round tables, cooking workshops, specific activities for children, artistic performances, debates and opportunities for job seekers to get in touch with companies in the area. Many activities involve children and young people from local schools, as we believe that, as aware citizens of the future, they should meet each other and share and exchange ideas and knowledge with each other. Young people and families of different nationalities will participate, each with a story to tell and experience to share, to describe their countries of origin and the reasons they left it, their expectations, both fulfilled and unfulfilled, the lives they live, their dreams and hopes for the future.