From 7 to 26 June 2019, a selection of works by photographer Giuseppe Firenze is on display at OCRA Montalcino. Surreal images created through a skilful use of the camera combined with a passion for graphics: a perspective on reality representing the varied world of human nature. 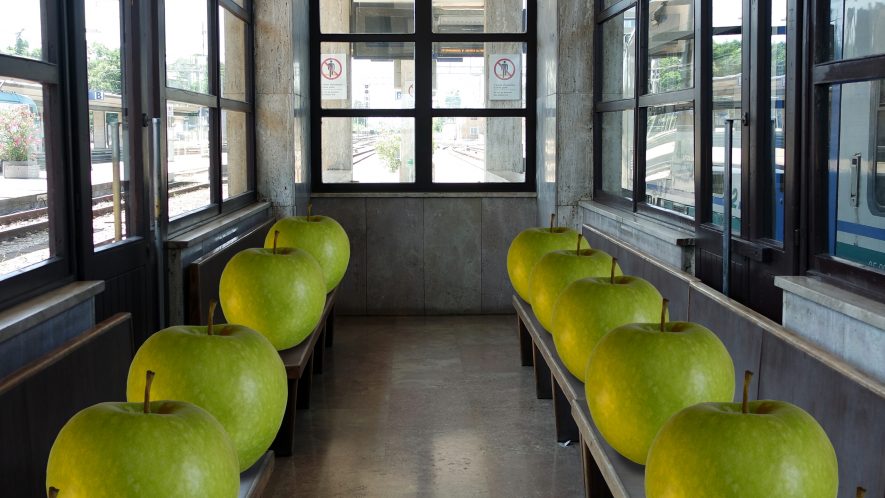 Under the patronage of the Municipality of Montalcino, the Scuola Permanente dell’Abitare presents In the Footsteps of Magritte, a monographic exhibition of photographic compositions by photographer Giuseppe Firenze. A selection of pictures which were taken between 2014 and 2016 and which are the results of the artist’s professional career is on display in the halls of the Complex of Saint Augustine. The pictures provide a perspective on how the artist sees the world and how he uses photographic art combined with graphic techniques to give life to his perspectives and surreal characters.

The title of the exhibition, In the Footsteps of Magritte, is based on the artist’s intention to draw inspiration from the great Belgian painter René Magritte (1898-1967), who was one of the most original and famous surrealist painters. Like him, Giuseppe Firenze plays with shifts of meaning, using both unusual combinations and unreal deformations. The sometimes childish style of his pictures is similar to an illustrator’s style. His images deliberately highlight the aspects of photographic illusionism, which, as in Magritte’s works, marks the distance between reality and its representation. The photographer plays with the relationship between composition and reality by proposing images where the picture in the picture has the same appearance as the reality it represents, so much so that they mix with each other. His combinations and metamorphoses are also very suggestive. His surrealism is therefore a look at reality motivated by a curious interest in the variety of human nature.

The exhibition provides an opportunity to recognize in Giuseppe Firenze’s works Magritte’s recurring themes, such as the apple, the sky, nature, mystery, the absurd, the impossible and disproportions, which is the result of the constant research that characterizes the works of the Tuscan-by-adoption photographer, who skilfully uses the expressive power of his pictures to see the world from a different perspective.

Giuseppe Firenze was born in Agrigento in 1960 and moved to Tuscany in 1979, although he has always considered himself to be Sicilian. He defines himself as a musician, a graphic artist, a writer and a photographer. His first memory of graphics has to do with his father, who used honey to draw a horse on a slice of bread for him. When he was ten, he won his first camera with a 12-film cartridge, which he still owns, at a Panini collection competition. He has always been curious about the world around him and he is attracted above all by the graphic aspects of the things he observes, in particular by unusual geometries, such as asymmetries and voids. As an autodidact, he has studied art history, photography and music, which he devoted his life to between the 80s and 90s. Since 1995, he has been part of the Giglio Rosso Photographic Group of Castelfiorentino, with which he has participated in various exhibitions and collective publications. “In the Footsteps of Magritte” is currently on display in Rome at “DROP Monti” in Via Cavour.

The tasting is offered by the farm Col d’Orcia. Col d’Orcia literally means hill overlooking the river Orcia, which marks the southwest border of the area where Brunello di Montalcino is produced; the name of the company therefore has to do with the area where the vineyards are planted. The mission of Col d’Orcia is to produce the best wine from the exceptional combination of the soil and climate of this area of Montalcino. At Col d’Orcia, for many years now, we have always attached great value and paid particular attention to the natural environment where we operate. For this reason, in 2010 we made the decision to start the process necessary to obtain the organic certification and thus become the largest organic winery in Tuscany. Since 24 August 2010, only organic farming practices are used in the entire estate, including vineyards, olive groves, arable land, and even the park and gardens. We are very proud of our achievement and that we can call Col d’Orcia an organic oasis in Montalcino.