On Friday 30 September 2016 at 7:00 p.m., as part of the series Fridays at OCRA, OCRA Creative Workshop of Living presents “Found Architectures”: a conversation with Cristoforo Bono about four post-war drawings by engineer Antonio Ricotti that have been found, which are owned by Officina Metropolitana di Montalcino and are on display at the OCRA premises. 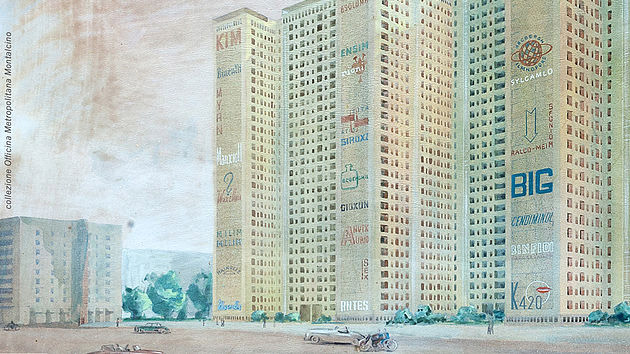 The four drawings were made in 1946 on the occasion of a contest for Milan’s zoning plan and they represent a proposal for the city, its layout and possible operations to be carried out before the reconstruction to address the damage caused by the bombardments. They do not directly express any architecture style or poetics, but they provide an “open field”, a range of different possibilities; they represent the “degree zero” of architecture at a crucial moment in history and in the history of Italian architecture, in a crucial place that was fundamental for the development of the country.
From a contemporary point of view, the drawings put forward the idea of a renewed and uniform city, which then was not implemented, and reveal hints to later events, when uncontrolled and tumultuous manufacturing was carried out in Milan, which, in certain cases, led to the ideal tension that was translated into traditional meanings of architecture. In a general sense, the drawings were made at a time when and in a place where architectural rationalism no longer implied a manifesto and a proposal, and an urban theory (“architecture of the city”) had yet to emerge. The results and the presuppositions of both aspects can be inferred from the drawings, namely from the shapes and dimensions they suggest compared to the major monuments of the city that remained undamaged by the bombardments.

The history that emerges from the drawings is reflected by some events that occurred in Milan in those years and subsequent years and that are the first concrete architectural expressions aimed at overcoming rationalism, which had been fading away or had become the stereotype of power and speculation. In turn, these urban events derived the best aspects from the traditions of rationalism, which can partly be seen in the drawings found: urban planning laws, dimensions, contexts and the relationship with the historical city considered as the founding elements of architecture.
During the conversation, other projects will also be illustrated, including one about the town of Buonconvento – Montalcino (Siena).

Cristoforo Bono was born in Verbania, Lake Maggiore, in 1946. He trained as an architect at the Faculty of Architecture in Milan (1967-68) during the years of “experimentation”, while combining teaching and research based on real problems (for example, building the new University of Calabria). During the 1970s and 1980s, he conducted research and project activities while continuing teaching as a contract professor or subject expert at the Schools of Venice, Milan Bovisa, Bologna and at the Chergy Pontoise Summer School, Paris.
In 1985, he coordinated the activities necessary for the Italian delegation of the Triennale di Milano to take part in the International Exhibition of Tsukuba, Tokyo. During the ’90s, he carried out projects for the cities of Munich and Dusseldorf together with architect Matteo Thun. In the same years, he conducted research on emerging issues in the cities of Rome, Genoa and Turin together with architect Andrea Balzani and with the coordination of the Ministry of Urban Areas. At the same time, he participated in two major Milan contests, Bicocca and Varesine, with the group led by Aldo Rossi. In the 2000s, he professionally dealt with architectural and urban issues based on the relationship between history and project: ancient palace and new village at Budrie di San Giovanni in Persiceto (Bologna); renovation of unused industrial sites along the River Adda; and other urban renewal issues in the city of Verbania, where he founded the “Free Academy for the Environment”, which has promoted meetings and debates on local issues. He lives and works in Montalcino.

The opening tasting is offered by the farm STELLA di CAMPALTO

The farm S. Giuseppe takes its name from the sharecropping land that belonged to Giuseppe Martelli, who gave it the name in 1910. The land was abandoned in 1940 and fifty years later, it was taken over by Stella di Campalto. It is located south of the town of Montalcino, near the Abbey of Sant’Antimo. The abbey and the church are isolated in the green countryside. The simplicity of its architectural lines and the purity of the light that radiates from the alabaster from the nearby quarry, which the abbey is made of, when it is illuminated by the sun, are striking. Harmony and simplicity, two qualities of the Romanesque church, are in fact qualities typical of the surrounding area: the company preserves the vines and cultivations, while protecting the natural habitat in its surroundings. Since 1995, it has had a biodynamic certification (certification body Sot Icea and since 2005 certification body Demeter).

INFORMATION ABOUT THE EXHIBITION