Friday 25 March at 7:00 p.m. the new season of events Fridays at OCRA starts at the Creative Workshop of Living in Montalcino. The first event of the new season is about Alessandro Vignali, a Roman painter who, through his canvases, presents to viewers his painting style stemming from an inner need, the result of his deliberate and conscious rejection of all genres and schools of thought in constant search of absolute expressive purity. 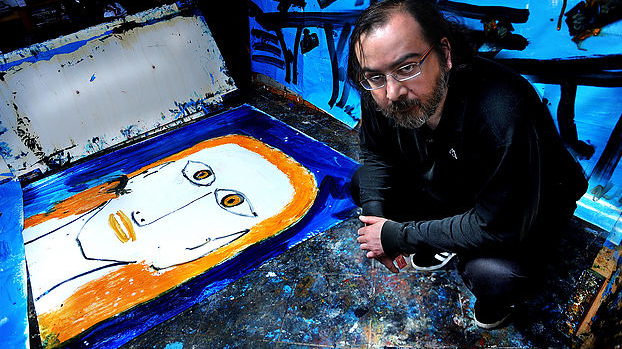 Friday 25 March at 7:00 p.m. the new season of events Fridays at OCRA starts at the Creative Workshop of Living in Montalcino. The first event of the new season is about Alessandro Vignali, a Roman painter who, through his canvases, presents to viewers his painting style stemming from an inner need, the result of his deliberate and conscious rejection of all genres and schools of thought in constant search of absolute expressive purity.
Alessandro Vignali started painting in his late teens and has not stopped since then. During his over thirty years’ artistic activity, he has painted an extraordinary number of canvases while focusing his expressive force on some striking themes, including war, cities of the future, and female faces.
The artist’s diuturnal inner conflict emerges from his paintings, though it is filtered through a very complex symbolism. However, thinking that his painting is self-referential would be a big mistake. One of Vignali’s great gifts is his ability to raise universal questions and to force those who stand before his works of art to reflect on themselves. Not only the paintings enter the viewers’ imagination, but also the viewers are involved and attracted by the canvases, thus creating an interchange that becomes meta-painting.
Alessandro Vignali’s art is pure, deep, uncomfortable and intense, it shakes the conscience of each of us and encourages us to listen to the voices of our unconscious.

Alessandro Vignali was born in Rome in 1965 and currently lives and works in Alviano, in the province of Terni, where he moved in the early ’90s after he made a series of trips, especially to the Nordic countries, which greatly influenced his art and his vision of the world. Painting is and has always been the Roman artist’s only activity.

Vignali began painting when he was very young and after many years’ work and a large number of paintings executed, he held his first exhibition in Umbria in the mid 90s. After that, he exhibited in various galleries in Italy and abroad, including the gallery Il Melone in Rovigo (in a solo exhibition curated by Nicola Galvan) and his recent exhibitions in London, New York, Bratislava and Terni, with a solo exhibition at Palazzo di Primavera curated by Enrico Mascelloni. One of his works is on permanent display at the Museum of Contemporary Art in Terni.
Recently, a work by the artist has been selected to participate in the HCMAB 2016 (the fifth Himeji Castle Modern Art Biennale) to be held in Japan in July.

The opening tasting is offered by the company Cupano.
The history of the Cousin family in Montalcino begins in the seventies, when Ornella and Lionel came to visit a French painter, Yoran Cazac, the first foreigner who settled in Montalcino.
Yoran Cazac was often visited by Balthus, James Baldwin, Francis Kuipers, Edouard Boubat, Judith Thurmann and many others. They stood there for days, sometimes weeks. To them, Montalcino was a mythical place, an archetype of measure and magic. At that time, the area was not-much-visited countryside, the wine was not well known, Brunello was already produced, but there were no wine bars as there were no paved roads. Nowadays, the Cousin couple live on a stone hill above the Ombrone and thanks to its location, the company has access to natural drainage, minerals and a wonderful view. Their mentor was Henri Jayer from Burgundy, who taught them his strict convictions: few hectares, wine made in the vineyard, no pesticides or chemical fertilizers, reduced harvest yields, removing any unripe or mouldy grapes, autochthonous yeasts, malolactic fermentation with fine lees in medium-toasted French barriques. Carlo Ferrini chose the soil and the cuttings, the planting density and the height of the cords. Until his death, François Bouchet shared with them his simple and effective biodynamics knowledge which he had acquired as an experienced winemaker. And when Giulio Gambelli – staring at them in silence with a glass in his hand – twisted his index finger into his cheek, they bottled the wine. “Thanks to these masters” – Lionel told us – “today we know how not to make too many mistakes, and perhaps we’ll manage to put into the wine the memory, the landscape, a season, an enchantment.”