As part of the FerMENTInscena workshop, the Permanent School of Living and Foundation Bertarelli present Truth, Dare, RECITAL, Letter, Penalty!, a serio-comic recital by Francis Pardeilhan and Manfredi Rutelli 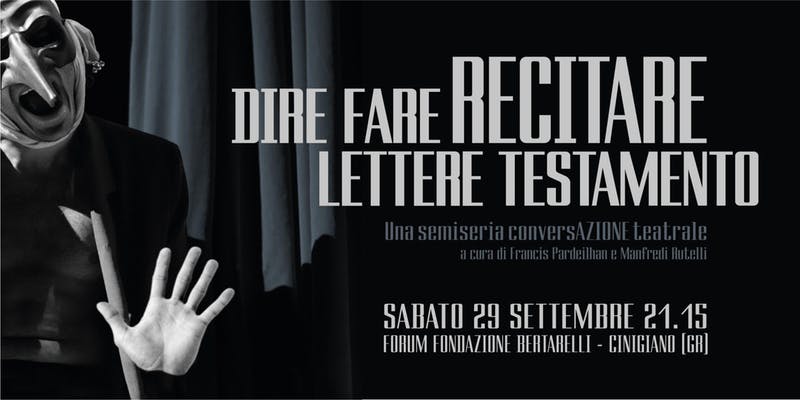 Truth, Dare, RECITAL, Letter, Penalty! is named after the children’s game with penalties. With variations on this theme, Francis Pardeilhan and Manfredi Rutelli will have the fun opportunity to give a serio-comic recital on how acting comes about, how actors work, and on the theory and practice of an actor being and acting on stage; not a “demonstration of an actor’s work”, but a performance about an actor who plays no role other than measuring themselves with art. (“Art begins where there is no role, where there is only the Ego in the circumstances given on stage.” – Stanislavsky). The description of an experience through possible simple answers found by using and verifying simple practicable principles. In a few words, truth or dare, like the children’s game, which lead to acting. An experience where letters give meaning to words, literature, and the recited text, while the role of a teacher is to pass on something to students and future generations: truth, dare, RECITAL, letter… and hopefully not a penalty!