the scent of red#2

From 29 March to 19 April 2019, installations, videos and photographs on the theme of voyeurism and exhibitionism are on display at OCRA Montalcino. A highly interactive and dynamic path of exploration involving the senses and stimulating curiosity. 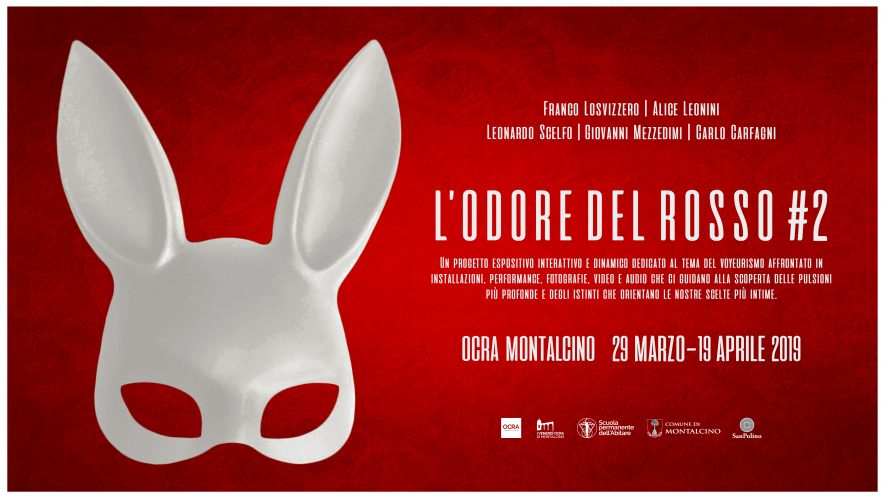 Under the patronage of the Municipality of Montalcino, the Scuola Permanente dell’Abitare presents The Scent of Red#2, a complex and heterogeneous exhibition project that provides possible interpretations of and encourages to reflect on voyeurism and exhibitionism in our time.

Visitors to The Scent of Red#2 will have the opportunity to move freely around the gallery and the halls in the Complex of Saint Augustine to immerse themselves in specific sensory dimensions that stimulate the body and mind. The theme of the exhibitionism is explored in installations, performances, photographs, videos and audios that let visitors discover their innermost drives and instincts that guide their most intimate choices. The centrality of the individual and subjective experience of those who walk in the spaces of the exhibition is an integral part of the project that enriches and sometimes even modifies it.

The interdisciplinary collaboration between the artists highlights the importance of a shared cognitive path based on careful critique and analysis of the changes in modern society, which has been radically affected by the digitization of information and the communications revolution in recent decades. The exhibitionist nature of our society has changed the ways and times in which human beings relate to each other. The performances and workshops will encourage reflection on how space is appropriated through the movements and gestures of our bodies.

How we perceive space is a highly subjective experience; to investigate the ways and times in which we perceive space is necessary for those who want to live in the world with their body and soul; especially in our society, where people can be in different places at the same time, constantly shifting between the real and the digital world.

In 11-The Alchemical Door by Franco Losvizzero, which was presented in 2016 exclusively for the Rolling Stone magazine, the emblematic White Rabbit is a metaphor for the collective unconscious. The White Rabbit, an iconic character born from the mind of Lewis Carrol and the protagonist of many works by Franco Losvizzero, lets us discover our unconscious, where our primary drives and primordial fears mix with ancestral rituals and symbols. On the occasion of the vernissage, an unprecedented performance is given at OCRA Montalcino: “White Shape”.

The Scent of Red is an interdisciplinary work by Alice Leonini composed of a perfume, two videos made in collaboration with Carlo Carfagni, and an audio installation available on YouTube with QR CODE access. The video deals with the themes of eros and couples dynamics. It makes viewers question themselves about their own voyeuristic nature by offering them the possibility to follow the trail of red to access content that is otherwise not available: the stories Blackstop and I Miss Myself by Leonardo Scelfo, which deal with the theme of female autoeroticism.

The video Casta Diva by Carlo Carfagni explores the increasingly topical theme of stardom, a phenomenon where people tend to deify personalities from the world of entertainment, because they need to have someone to admire and to consider highly socially prestigious. Stardom in the social network era involves all those who, willingly or not, find themselves on the stage.

Suddenly, Alice Leonini’s wolf appeared, the bedroom of a teenager who moves between two worlds, the world of childhood tenderness and the world of sexual desire. Her diary includes words and images that metaphorically represent her most intimate desires, fears and anxieties. The latter are also expressed in an audio installation written and interpreted by Simona Rota and in a video by Carlo di Carfagni.

Metrodreamers by Giovanni Mezzedimi is a project about photographs printed on lexan, the protagonists of which are people photographed in their intimacy, for example in the transition from a state of wakefulness to sleep or in resting phases.

The Metamorphosis of Narcissus by Giovanni Mezzedimi is composed of a video and a photograph through which the well-known myth of Greek origin, which explores the theme of boundless love for oneself, is reinterpreted. The installation is based on the consideration that all living beings are generated by others and on the awareness that every single life changes and is subject to a continuous metamorphosis.

Eros and Thanatos by Giovanni Mezzedimi is a video focused on the eternal struggle between life and death, on the vital impulses that govern our experience in the world, “Beyond the principles of pleasure”. The video is based on a storyboard by the well-known cartoonist Milo Manara (the original storyboard is on display in the exhibition).

Finally, two video installations: The Last Supper (with Cristina Guastamacchia and Stefano Neri) by Alice Leonini, and A Romantic Dinner (with Luca Biagini and Barbara Lo Gaglio) by Giovanni Mezzedimi, which represent a couple having dinner. The dynamics and languages that emerge from the two installations diverge, but at the same time, the two installations have similar results and interesting things in common.

Franco Losvizzero is an artist and a director (with his real name Andrea Bezziccheri). He lives between Rome and New York; he has directed 5 films and won several awards at film festivals. In 2000, he founded the Biennale of Porto Ercole, of which he was the director for 5 years, when he lived between Forte Stella in Tuscany and Castel Sant’Angelo in Rome. He is also a glass sculptor in Murano, where he has created mechanical installations, paintings and performances for about 20 years. Losvizzero works with different media and holds exhibitions all over the world. The main exhibitions include: 56th Venice Biennale, Opening Performance in the Gardens of the Biennale in 2015; 54th Venice Biennale – Arsenale – with Luca Maria Patella, curated by Italo Zannier.

Carlo Carfagni Roma is a lecturer in art history and psychology of visual perception, an artist, a filmmaker, a writer and a theatre director. In 1998, he participated in the “Visionaria International Film” in Siena and in the “Short Film Festival” in Rome – 2009 screening of “Maree” and “Mater et filius a Cortofiction” Chianciano Terme.

Alice Leonini studied at the Academy of Fine Arts in Florence, Cuneo and Seville. She is a reserved artist who lives outside the art system and she considers painting as a language of belonging, but she loves to explore other forms of expressive, from performance to videos, from installations to photography. For several years, she has devoted her life to street theatre, while working together with the Kripton company in Florence and with the Straligut Theatre. She is currently a lecturer in painting.

As soon as he graduated from the Faculty of Architecture in Florence, he created numerous projects and won the international contest for the construction of the Archaeological Museum of Ascea Velia. In addition to working as an architect, he also carries out his research on visual arts, especially photography and video art. Together with Milo Manara, he wrote the screenplay for his second short film, “Eros and Thanatos”, which is in competition for the AOFA (American On Line Film Award) and won the Terre di Siena Film Festival.

Leonardo Scelfo is an art historian, a curator, an expert lecturer in contemporary education, and a writer. He has authored various writings on art and anthologies for middle schools. He has considerable experience as a curator and has written several publications.

The complex project includes the participation of artists, actors and performers. On the evening of the opening of the exhibition, two performances by Franco Losvizzero and Alice Leonini will be put on.

The opening tasting is offered by the farm San Polino, a small family-run farm that uses permaculture and biodynamic organic farming to produce a high-quality Brunello di Montalcino. The company is based on the belief that humans and vines are symbiotically connected by the same thread that connects everything on earth. The harmony, balance and structure of San Polino wines reflect the complex and wonderful ecosystems of the vineyard and the cellar. This wine is the opulent expression of the lands of San Polino.

On the occasion of the finissage of the exhibition, the convention “Voyeurism from Freud to Facebook”, will be led by psychotherapist Loredana Spaccaterra. The convention will provide an opportunity to investigate the phenomenon of exhibitionism in every sense, with the aim of defining its dynamics and possible links with the nature of the human soul, including curiosity and imagination.