THE ROPE
Memory and Modernity


From 01 to 22 June 2018 a selection of works by artist Rocco Sardone, Apulian by birth but Sienese by adoption, are on display at OCRA Montalcino. The exhibition features a series of works related to the theme of the rope, a commonly used object that the artist interprets from different angles, memory and modernity, the leitmotif of the paintings presented. 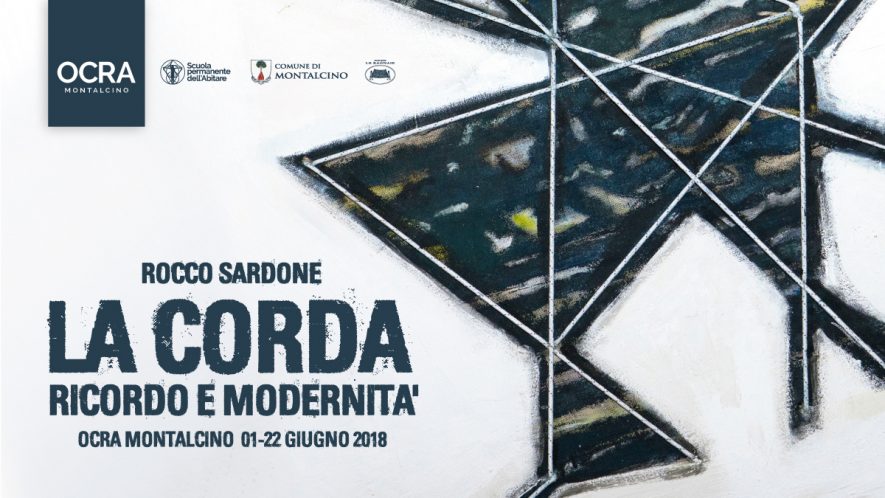 Under the patronage of the Municipality of Montalcino, the Permanent School of Living presents the exhibition “The Rope, Memory and Modernity”, a journey between past and present through an unconventional vision that brings forward a contemporary proposal based on a common object.

The rope is a simple object that is used every day to carry out small but important tasks. Rope is linked to the author’s childhood memory, namely the act of “hanging out the laundry in the yard”, an action that today is typical of certain areas where people deal with precariousness. Often, artists draw inspiration from everyday situations and take into account the artistic currents and fashions of the moment. In this case, Rocco Sardone has based his work on feelings, which become a symbol and at the same time outline an aesthetic proposal.

“Once the object that the work focuses on was conceptually identified, it was necessary to study the technique to practically put that object in the painting: to search for a solution that would take into account both the aesthetic requirements and the balance and solidity of the canvas. The main materials used to achieve this objective were gilding plaster, a few oil paint colours and the rope. To achieve a good result, the canvas needs to be properly prepared so that it can support the taut rope. By using ancient materials, such as rabbit glue and gilding plaster, one can achieve the desired solidity and aesthetic quality”. This is how Rocco Sardone tells the story behind the creation of his works.

The exhibition is also a journey to the sensitivity of the artist through time, the rope being like a thread that goes through our souls and shapes itself thus becoming a metaphor for feelings. The artist wonders about today’s society, about the ever faster world where we try to find our space; and so, the memory of the rope becomes an innovative element from a stylistic point of view: a simple object becomes a contemporary proposal.

Rocco Sardone, born in Puglia in 1954, is a painter. At the end of the sixties, he moved to Siena, where he attended the Art Institute and obtained his diploma in sculpture in 1975. However, his great passion had always been painting. In Siena, he met and associated with various artists and discovered a world that was new to him, mysterious and fascinating at the same time. During his visits to the museums and churches in the city, he carefully studied the great masters of the Siena school and was struck above all by the gold backgrounds, Duccio di Buoninsegna’s altarpieces, and Jacopo della Quercia’s sculptures. In the seventies, he became interested in modern art, on which he carried out in-depth research that clashed with the great social tensions of his times. In the early eighties, he approached the newborn Transavantgarde movement, the style of which he adopted in his works, where he reinterpreted some aspects typical of the movement. In 1983, he made his debut with a major exhibition at the Teatro Povero in Monticchiello (Pienza), a well-known popular theatre in Val d’ Orcia, his land of adoption.

Recently, Rocco Sardone has held two significant solo exhibitions: one in Cortona in 2008, and a survey exhibition in Montalcino in 2009. He currently lives and works in Tuscany, is shy and reserved, and is constantly searching for a language rich in symbols.

Many of his works are in prestigious collections in Italy and abroad.

“It would be wonderful if one could get up in the morning with a free mind in front of a white canvas, imagine the beauty of the world and translate it into shapes and colours representing our times”, said Rocco Sardone about his artistic vocation. He is a sensitive man who, like many other sensitive people, seeks the quality of things, which is often elusive in a society as hectic as ours. His professional life goes hand in hand with and draws strength from his emotional life.

The opening tasting is offered by Le Ragnaie, an organic certified farm specializing in the cultivation of vineyards and olive groves located in different areas in the district of Montalcino, which allows the farm to produce different wines that are typical of the area, thanks to the care that the company owners put into every phase of winemaking, while preserving the land they live in.