The exhibition (S)CUL(P)TURE forms of a life by Emo Formichi was inaugurated at the Creative Workshop of Living on Friday 30 October 2015 at 8:00 p.m. The creative force of a keen observer who develops his natural talent through the art of skilfully positioning the most various objects recovered from the waste of industrial civilization. 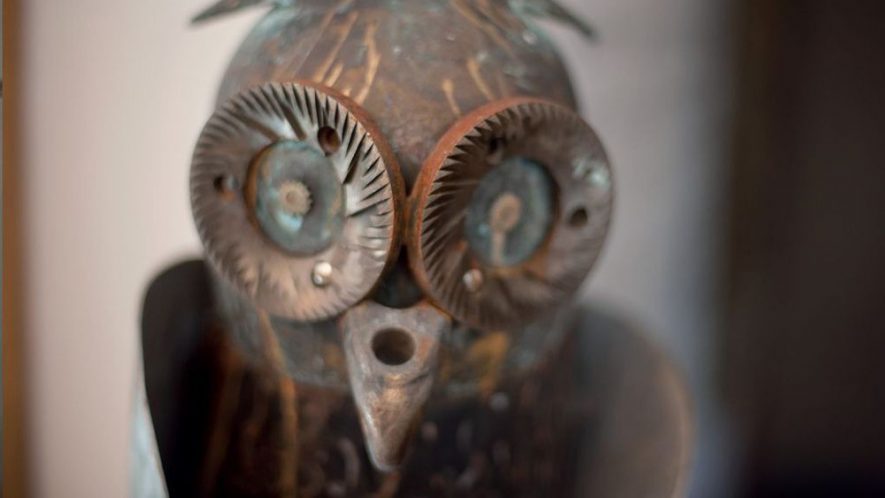 The exhibition (S)CUL(P)TURE forms of a life by Emo Formichi was inaugurated at the Creative Workshop of Living on Friday 30 October 2015 at 8:00 p.m.
Through a selection of sculptures, this solo exhibition of the artist shows the creative force of a keen observer who develops his natural talent through the art of skilfully positioning the most various objects recovered from the waste of industrial civilization.
Emo Formichi’s sculpture style is the result of a spontaneous creative process that feeds on the experience of a tireless worker who has never escaped difficulties in his life and has gone from being a farmer to a truck driver, a quarryman, a cabinet maker and a painter.
The protagonists of his works are the tools of his everyday work. They are old and new objects that acquire a new meaning in Emo’s mind. Formichi’s sculpture style stems from objects that for most people have become meaningless waste to be thrown away: nevertheless, they have the charm of nature observed over the years by farmers on their family farms; the dimension of everyday hard work in the fields; proud animals that are the protagonists of rural life; coloured glass and finely chiselled metals put together to create dancers and gymnasts: women have always been a source of inspiration and lifeblood of his work.
Emo is an inexhaustible source of new ideas. Still today, he keeps working with alacrity by welding, sawing and assembling things. He is an artisan rather than an artist. He has the power to catapult observers into a world which is different from the everyday world and which represents memories of a past life… memories translated into physical forms with sensitivity and imagination.

Emo Formichi was born in Pienza in 1927. In his life, he has done several different jobs. From this versatility he has drawn the technical ability and inspiration that have allowed him to create his surprising sculptures. His skills range from working metals to working wood and other materials.
His great experience allows him to transform into poetic images any objects recovered from the waste of our modern civilization, which represent irreplaceable pieces in the creative process of the artist from Pienza.

The opening tasting is offered by the farm Il Pietroso, born in the 70s from the passion for wine of winemaker Berni Domenico, who was also known as “DELFO”, the company aims to produce small quantities of fine wines in accordance with local winemaking tradition.
The company only cultivates Sangiovese vineyards, which are located in three distinct areas which are among the most suitable in the area of Montalcino. The wines of Pietroso are the typical expression of the Sangiovese grape variety; wines with a typical colour, elegant scents and good structure that are suitable for a long aging.