From 29 September to 20 October 2017, a selection of works by Tuscan artist Giuseppe Bartolini is on display at OCRA Montalcino. Giuseppe Bartolini is one of the most intense Italian figurative painters. He depicts reality as it is, often pushed to the limit, like he does in his unusual landscapes or with the cars depicted as wrecks, which express the search for and communication of values that the artist has carried out since the beginning of his career. 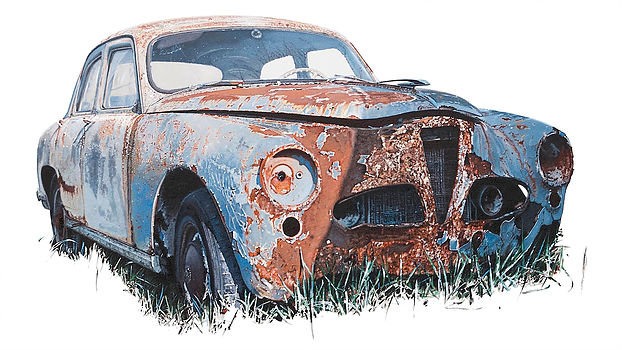 As part of the series Fridays at OCRA in Montalcino and under the patronage of the Municipality of Montalcino, the Permanent School of Living presents “BARTOLINI | CAR RUST – UNUSUAL LANDSCAPES”, a selection of works created by Tuscan artist Giuseppe Bartolini on display in the halls of the Complex of Saint Augustine.
Bartolini is one of the most intense Italian figurative painters and a member of the artistic group La Metacosa. He uses his impeccable expressive skills charged with meaning and expressive force through his oil on canvas technique to depict reality as it is, often pushed to the limit. His figurative painting is very accurate and far from the abstractionism and extravagance of homogenized artistic production typical of the late seventies.
His need to paint, as he calls it, emerged from “an urgent inner drive that pushed me and other young people to paint accurately and with precise ethics.”
UNUSUAL LANDSCAPES, both natural and artificial, are the result of human technique and human constantly changing the world; while CAR RUST, rusted car wrecks overgrown with vegetation, expresses the search for and communication of values that the artist has carried out since the beginning of his career.

“When someone or something gives me an emotion, I want to give it back, but how is it possible within reality?”
Giuseppe Bartolini

Giuseppe Bartolini was born in Viareggio on 6 June 1938. He began painting his first oil paintings in 1958 and the following year, he participated in the Larderello Contest.
In 1959, the painter Sandro Luporini introduced him to a group of existential realism artists in Milan (Ferroni, Guerreschi, Banchieri, Romagnoni and Luporini), which helped his artistic skills grow. Ever since he was a child, he combined his attachment to his cultural and environmental origins with his interest in the most important painting experiments carried out by the generation active after the war.

In 1960, he won the first prize at the Italian students’ art exhibition.

After he lived in Milan and Florence, in 1964, he settled in Pisa, where he still lives.

Since the second half of the sixties, Bartolini’s painting has attracted the attention of important critics and gallery owners. At the end of the seventies, Bartolini joined the group La Metacosa, an artistic association founded by Tuscan and Lombard painters (Biagi, Ferroni, Luino, Luporini, Mannocci and Tonelli) that operates in Milan, Pisa, Viareggio and London. Bartolini is one of the most intense Italian figurative painters and he has become an interpreter of reality, both in nature (landscapes) and in metropolises (suburbs), by combining exceptional technical knowledge with great poetic sensitivity, which explores values characterized by metaphysical suspension and strong lyrical inspiration.

The opening tasting is offered by the farm Col di Lamo. Its owner, Giovanna Neri, inherited her passion for wine from her father, and today, she is an established and sought-after wine producer. What makes Col di Lamo wines special is Giovanna’s ability to give her products a particular kind of love that only a woman, a mother, can feel for her child. This is how she considers her “creatures”, Rosso di Montalcino, Brunello di Montalcino, Lamo and the Acquavite, to the making of which she has devoted her life, while determining and guiding each phase of the production process. Exactly as her father taught her. The Col di Lamo wine label has been creatively designed with the aim of giving it a feminine touch: the logo represents the delicate profile of a woman’s face, while the orange and green of Lamo represent the image that Giovanna wanted to give to her company and her products.