Aris, one of the most interesting artists in European urban and contemporary art, has created a site-specific work in the Complex of Saint Augustine. 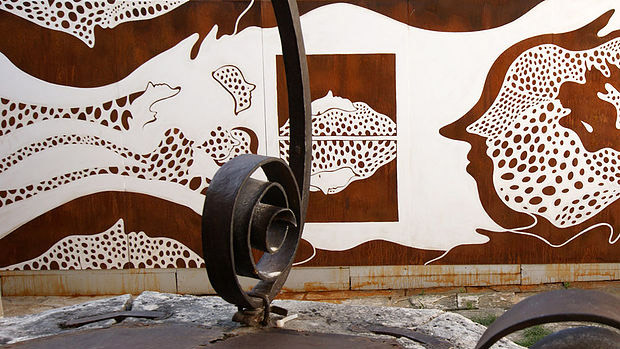 In June, OCRA Creative Workshop of Living invited Aris, one of the most interesting artists in European urban and contemporary art, to create a site-specific work in the Complex of Saint Augustine.
Some years ago, the Complex of Saint Augustine was almost completely renovated by the studio Milesi & Archos, thus giving back to the city of Montalcino a place that had been abandoned for a long time and that now hosts a new environment aimed at active cultural sharing: the headquarters of OCRA Creative Workshop of Living. Living considered as building and developing relationships, which, just like breathing and eating, are primary needs, collective actions. OCRA was created as a place where people can share ideas and conduct research on this theme: a place for art and culture, a reference point for the surrounding area, where talents and ideas related to the concept of Living are cultivated.
Currently, work is still in progress on the new headquarters of the Brunello Wine Consortium: to set up the construction site, a wall had to be built in the cloister, which will limit access to it for a few months.
Keeping in mind these facts and intentions, Aris has designed 10 panels that represent a single story that are set up on that wall that temporarily creates a discontinuity and rupture in the cloister.
His works are inspired by reflection on Living: with his typical synthetic style, Aris has represented the past as a sleeping being who is being observed by various faces and lets themselves be inhabited by mysterious and delicate figures.
“To make a mural live in a public place, on a wall, means to focus one’s imagination on its surface and make it visible to everybody.”

Aris began his activity in 1993 by painting on trains and walls in a small town near Florence.
He developed a personal lettering style which he gradually left behind in search of his figurative style, which he later based on heaps of shapes and forms. In his experiments with and research on style, the support (train, wall, sheet metal or other) and the context it is immersed in play a central role: therefore, travelling and his need for exploration have become fundamental aspects of his work that have led him to paint in various countries, including Spain, Germany, Poland and Russia.
He has made several paintings on walls in public areas not traditionally meant for art. He mainly focuses on the renovation and redevelopment of urban and peri-urban landscapes by using tempera, a material with strong symbolic value: the images that inhabit the new surfaces are created with the same material that is usually used to remove them. Moon sceneries and forgotten worlds are his favourite themes in his paintings. In recent years, he has participated in various exhibitions and projects, including: From Street to Art, IIC, NY, US, 2014, curated by S. Pallotta; Indoor Outdoor, SMS, Pisa 2014; Vedo a Colori, Civitanova Marche, 2014, curated by G. Vesprini; Icone 5.9, Modena, 2013, curated by P. Rivasi; City Bilder, Dresden, DE, 2012, curated by J. Besser; Piknik Festival, Esztergom, HU; Scala Mercalli, Rome, curated by G. Marziani; Street Art, Sweet Art, PAC, Milan, curated by A. Riva. (www.aix-pb.com)