paths of light. from the middle ages to the present between architecture and photography

Wednesday, 9 September, the course to bring listeners closer to the concept of light in architecture not only as an additional element of design, but as a concrete material that can be used like a tangible material is held at the Triennale of Milan – Lab Hall. 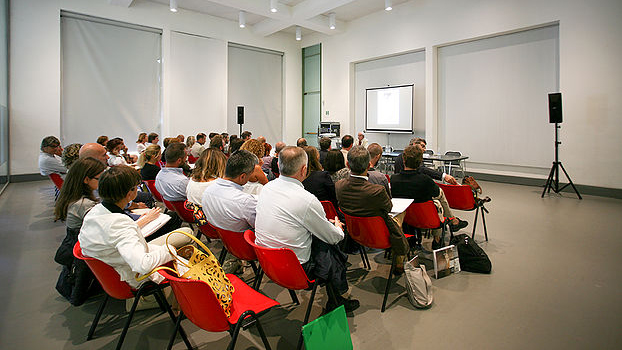 The course
Wallace Stevens prodded the architect by asking: “What slice of the sun does your building have?”
Despite the great advances in technology, no artificial light can evoke shades of mood as complex as those created by natural light at particular times of the day or in the various seasons. Shadows from artificial light are fixed and rigid. While in Western cultures, shadow is considered as the absence of lighting, in Eastern and Far Eastern cultures, it is considered the measure of light. Light rules over shadow, but shadow can disobey orders and impose its will. Shadow is often transparent – perhaps more than light itself – and it has a colour, a sound and a smell.
Studies on artificial lighting have recently (after 1962) revolutionized the concept of light, which so far has been generated by incandescent materials and substances, thus completely changing the way research is carried out: today research aims at using electronics to produce light based on the optical properties of some semiconductor materials that can generate photons through spontaneous emission.
A LED (light emitting diode) is an optometric device that offers countless advantages compared to traditional systems, including, in addition to the extended lifespan of LEDs: low power consumption, safety, saturated colours, light without IR and UV, and no mercury content. In addition, LEDs are not affected by vibration or moisture.
The convention aims at bringing listeners closer to the concept of light in architecture not only as an additional element of design, but as a concrete material that can be used like a tangible material.