On Wednesday 9 October, as part of the initiatives of the 2019 Landscape Festival, OCRA Montalcino hosts a conference to talk about climate change and the possible strategies to be implemented to counter its consequences. At the end of the conference, the inauguration of Federico Busonero’s Carbon exhibition. 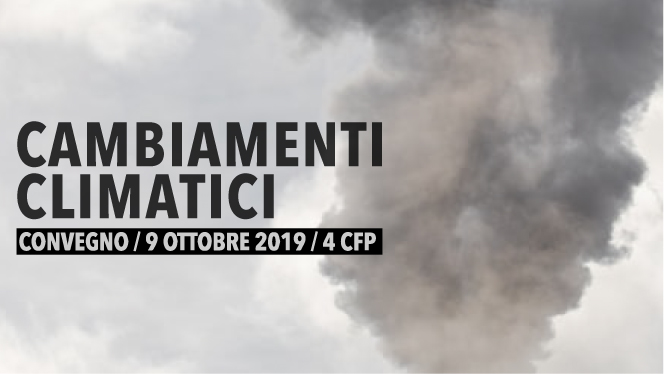 On Wednesday 9 October, as part of the initiatives of the Landscape Festival 2019, OCRA Montalcino hosts a conference to talk about climate change and the possible strategies to be implemented to counter its consequences. At the end of the conference, the inauguration of Federico Busonero’s Carbon exhibition.

OCRA Montalcino, with the sponsorship of the Municipality of Montalcino and in collaboration with the Order of Architects of Siena, dedicates an entire day to the increasingly urgent issue of climate change and its obvious consequences.

3.30 pm registration of participants for CFP assignment for architects
4:00 pm Microplastics and Chameleons: Roman Kroke’s Poetic Expedition into H₂O and Climate Change
5:00 pm Presentation of the project Il Sole nel Piatto: the Solar imprint of food by Federico Pulselli and Matteo Maccanti
5:45 pm Presentation of the Carbon project by Federico Busonero and Giorgio Vacchiano
6:30 pm Debate, moderated by Nicola Valente, president of the Order of Architects of Siena
7:00 pm Opening of the Carbon Photo Exhibition with the artist Federico Busonero

Focus on the interventions

Microplastics and Chameleons: A Poetic Expedition into H₂O and Climate Change
by Roman Kroke

How can experimental narrative nourish and revitalize the bond of mankind with everyday objects and the environment in which we live, thus promoting the concepts of ecological awareness and sustainable development? In 2019, the Helmholtz Center for Environmental Research (Leipzig / Germany) commissioned Roman Kroke to accompany an international collective of scientists as an artistic mediator during their expedition on the research vessel SONNE that crossed the Pacific Ocean from Vancouver / Canada to Singapore (May-July 2019). Resonating with scientists’ worlds of work – plastic pollution of the oceans and greenhouse gases – Kroke’s research has been devoted to three classic elements of Greek philosophy: earth, water and air. In pursuit of the key question above, Kroke’s attention has focused on exploring metaphorical transformations related to the plastic-earth-water-air relationship. In his conference and exhibition he will present his current research universe – a work in progress – showing sketches, photos, videos, fragments of sounds and different materials produced during the expedition. In this context, it will also provide an overview of the research following the cruise during which he further deepened his exploration of cross-border pioneering between the elements air, water and land through apnea training in the Philippines.

The Sun in the Plate: the Solar Footprint of Food ”
by Dr. Federico Pulselli and Dr. Matteo Maccanti

The Sun in the Plate project, funded by the MPS Foundation, is a project started in early 2018, which aims to study the contribution that the Sun provides to agricultural production in 24 companies in the Siena area, which produce typical local products. in most cases, organically. This study is carried out using the Emergy methodology (which can also be understood as a Solar Footprint) which allows us to understand how much Sun is contained within a product. The Sun is the engine of all things on our planet and every form of energy and matter present on Earth derives more or less directly from the Sun; using the appropriate conversion factors, the project measures the contribution of the sun and, consequently, the effort that Nature has made to make a certain resource available to us.

Carbon
by Federico Busonero and Giorgio Vacchiano
Over half of the carbon dioxide captured by biological systems in the world is seized by coastal marine ecosystems. Mangroves and algae, despite covering only a small part of the planet’s surface, are among the most carbon-rich ecosystems in tropical areas. Together with coral reefs, these organisms form living and interdependent communities, which host a huge biodiversity and ensure food security and protection from the extreme climates of many coastal communities in the world.

The loss of one third of mangrove forests in the last twenty years has caused the emission of large amounts of carbon dioxide into the atmosphere. The degradation of coastal ecosystems continues today, at a rate of two to fifteen times higher than that of tropical forests. If this dynamic continues, 30% of coastal algae grasslands and almost 100% of mangrove forests could disappear in the next 100 years. Furthermore, coral bleaching due to warming and acidification of ocean waters could soon lead to the catastrophic loss of this ecosystem. “Blue carbon” and “Green carbon”: two parts of a strictly interconnected system. And today, extremely fragile. [Giorgio Vacchiano]

In the years 1990-1995 the author, Federico Busonero, conducted extensive photographic research on the coral reefs of the Fiji Islands. The study was published in 1996 as a book, Fiji The Uncharted Sea, by the European Union and by the Government of Fiji. The 153 photographs of the sequence show the irreparable beauty and importance of the coral reef in order to preserve its fragile ecosystem. Twenty years later, in two successive trips, in 2018 and 2019, the author returned to the Fiji Islands in order to photograph and document the damage that the tropical forest and coral reef have suffered over time due to the climate change and other natural and human factors. Due to the vastness of the Fiji archipelago, the research took place, for logistic reasons, in the islands of Vanua Levu, Taveuni, Qamea, Matangi, both for surface and submarine shots. By its very nature, photography deals with the existent – of what has not already been said and seen: associating the word carbon (carbon), a non-visible gas, with lush forest and coral reef, research stresses that the forest and the ocean are not an asset to be consumed for our use nor a fictional paradise for the tourist, on the contrary they constitute a whole that plays a crucial role in maintaining the balance of the environment in which we live. The first two chapters of CARBON show the continuity between the tropical forest and the coral reef – two deeply interconnected ecosystems, visually and conceptually. The third contains images of altered forest and coral reefs and two texts, one by the author, Climate Change, and the other, Carbon, by researcher Giorgio Vacchiano, an expert on climate change.

About Roman Kroke
Roman Kroke, lawyer, works as an interdisciplinary artist throughout Europe, with a particular emphasis on socio-political issues and with a current focus: sustainable development concepts, linked to environmental pollution and big data. For the University of the Arts in Berlin (UdK) he has directed numerous seminars, in particular in the field of “experimental narrative”. Kroke’s projects include the development, coordination and direction of exhibitions, seminars and conferences – carried out in collaboration with universities, scientific research institutes, schools, memorial sites, prisons, museums, foundations and television productions. With his interdisciplinary approach Kroke aims to establish a dialogue between art, natural sciences, philosophy, history, literature and pedagogy. The works constitute metaphorical transformations placing a particular emphasis on the visualization of his process of creation and artistic research (drawings, sketches, photos, videos, etc.). Among the projects carried out: drawings and interviews in the field of documentary films broadcast on the European cultural channel ARTE: Awakening of the Cold War (working title – production currently in progress – 2019), Die Mauern von Warschau 1943-44 (2014), Ich bin (2012), Der Konvoi (2010); MICRO 2018 international scientific conference, Lanzarote / ESP conference (November 2018); The Universal Sea International Festival – Pure or Plastic!?, Exhibition Budapest / HUN (October 2018); artistic projects on “Exile and migration” in collaboration with the National Museum of the History of Immigration (Paris / France), the Belgian association Refugees Got Talent (2016) and the maximum security prison Fleury-Mérogis (2015). www.Roman-Kroke.de

About Giorgio Vacchiano
I am a researcher in forest management and planning at the State University of Milan. My research focuses on the development of simulation models in support of sustainable forest management, mitigation and adaptation to climate change and natural disturbances in temperate European forests. I deal with science teaching and communication.

About Federico Busonero
Training doctor, I undertook the photographic research in 1988. My first book Fiji The Uncharted Sea, a study of the reef of the Fiji Islands, was published in 1996 by the European Union and the Government of Fiji. This publication was followed by other research published in the books Foresta, Il Castagno, Sant’Antimo (Polistampa Edizioni, 2000/2003), The Land That Remains (Hatje Cantz, 2016) and in the portfolio The Chapel of St. Ignatius. (Seattle, 2005). For Les Editions Ottezec, Paris, I published Color and Form On The Reef (1997) in collaboration with Rodney de.C. Gray, and Permanent Blue Light (1997) together with the poet and artist Cozette de Charmoy. In collaboration with the poet Stefano Vincieri, an artist’s book was published on Every Stone Layer / On Every Laid Stone (MAVIDA Editore, 2017). My photographic works are collected in the National Library of France and in private collections, in Italy and abroad. I have lectured on photography at various institutions, including: the Cornell and Columbia Universities, Alwan for the Arts, the Benetton Foundation, the Marangoni Studio Foundation, the Regional Council of Tuscany, the Italian Cultural Institutes of Paris and Cologne. I have exhibited in various locations, in Italy, France, Germany, United States of America, Jerusalem, Hebron. On behalf of the United Nations agencies – UNESCO, WHO, UNIFEM – I undertook photographic research in Palestine in 2008-2009 and 2017. The CARBON project, a research on the consequences of climate change in the Fiji Islands, is underway.

CLIMATE CHANGE. A FORCED REFLECTION
Wednesday 9 October 2019 from 15.30 | 4 Professional Training Credits for Architects
Register on iM@teria
on in site on the day of the convention
OCRA Officina Creativa dell’Abitare
Via Boldrini 4, Montalcino (SI)
Phone +39 0577 847 065
info@scuolapermanenteabitare.org

aesthetics in architecture | series of meetings