archae-cuisine – lesson at dinner in the cloister

On 28 July 2017, at 8:00 p.m., at OCRA Montalcino, on the occasion of the SPdA Summer School The Profession of Architect on Friday, Marta Coccoluto and Denise Bresciani present a performance dinner to guide our guests in the exploration of food connected with the migration of cultures from yesterday and today with the aim of letting them meet and combine. 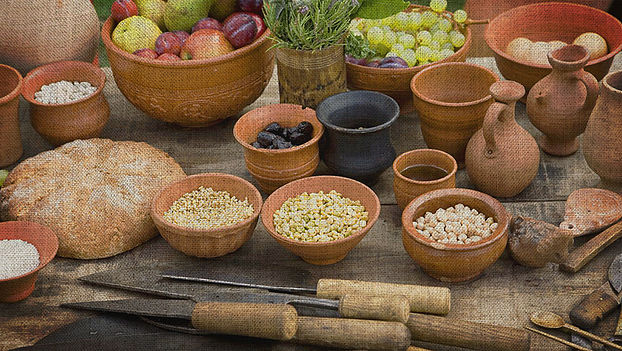 The course
The performance dinner guides guests in the exploration of food connected with the migration of cultures from yesterday and today with the aim of letting them meet and combine. A path will be set up in the cloister of Saint Augustin that our guests can walk to actively take part in culinary rituals focused on the act of eating from a new perspective, namely the need for and the richness of cultural exchange in our times. An experience of high cultural value that our guests can live and share for individual and collective growth.

In ancient times, the purpose of consuming food was not only to satisfy the physiological need for nourishment: the act of eating, as well as the act of drinking, had a much broader meaning linked not only with the food tradition of a people and its progressive acculturation through the introduction of new foods, but also with the connection with the divine, with the observance of the mos maiorum, i.e. the ancestral customs, with social roles, as well as with the definition and the preservation of its own culture when coming in contact with other peoples.

According to Pliny, for example, salt was necessary for existence, because knowledge and the use of salt distinguished civilized peoples, who knew how to live a fully human life, from uncultured savage barbarians, whose only aim was to appease hunger, without caring for taste or pleasure. The consumption of wine causes loss of inhibitions, which was considered a way to connect to the sacred, a way to come in contact with Dionysus, the god of drunkenness and drinking, the god of enthusiastic excitement, which is why women were strictly prohibited from drinking wine and could even be sentenced to death if they did, while soldiers used to enjoy and drink plenty of low-quality wine, and the rich, who, among others, preferred Falerno and Massico wine, considered it a must-have.

The Roman armies that conquered the Mediterranean were keen to maintain their eating habits both while on the march and in their encampments, so much so that they had livestock with them, and they introduced their food culture to the conquered lands. However, the Romans soon started combining their own food with typical local foods and specialties, which they then spread extensively with almost incredible efficiency. For example, Roman officers camped on Hadrian’s Wall could easily have oysters, while Mediterranean mackerels were available in the impregnable fortress of Masada.