restoration of the monastery
of saint columbanus

The Monastery being restored includes several buildings merged together, the most well-preserved of which are the former Monastery of Saint Columbanus and the Erba Odescalchi Palace. The latter, in turn, is made up of buildings merged together before Casa Gaggi was merged with the Monastery. The Monastery is located inside the walled city and is almost as large as an entire block of buildings surrounded by three streets: Diaz, Indipendenza and Raimondi. It is subject to cultural, archaeological, monumental and artistic heritage preservation regulations. 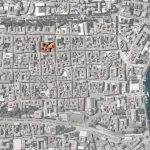 @archos archives The design was based on the overall preservation of the historical heritage site. The upper floors include 19 residential units, while the ground floor only includes shops and spaces open to the public, so as to improve the usability of the monastery complex by enhancing the internal pathways, porches, courtyards and cloisters. Priority will be given to tertiary activities in the fields of art, culture and professions while invasive activities will be excluded. In fact, the objective of the current project proposal is to restore the permeability of the street level and make it usable again by increasing urban porosity and improving the connections between the former monastic complex and the urban areas.
culturedesignlandscapelivingpublic workssacredwork
see all projects