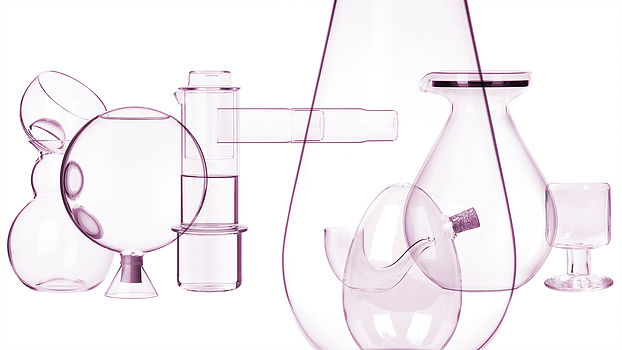 A retrospective exhibition curated by Matter of Stuff that presents the most recent objects connected with the culture of wine signed by the internationally renowned designer Sebastian Bergne, who uses glass as the main material for experimentation, and the most refined examples of his work from last 25 years.

On Friday 11 November 2016 at 4:00 p.m., under the patronage of the Municipality of Montalcino, the Permanent School of Living and Matter of Stuff inaugurate Blow By Blow 16, a retrospective exhibition of works by internationally renowned designer Sebastian Bergne curated by MOS Matter of Stuff, on the occasion of the 1st BaroloBrunello in Montalcino.

“It seems almost paradoxical that two-metre-tall Sebastian Bergne has such a special talent for reinventing little things that surround us. Since I first wrote about him at the beginning of 1990, this friendly giant of design has shown a unique ability to give a new perspective on and find new ways of using ordinary objects and common materials. From coat racks to bottle caps, Sebastian’s portfolio of the products he has created as an independent product designer over 20 years is full of visual seduction and visual surprises. All his collections are rich in intelligence, humour, charm and elegance, and they represent Bergne as a designer and a man.” (David Redhead)

Sebastian Bergne is a British industrial designer. He graduated from the Royal College of Arts in 1990 and founded his own studio in the same year. He has won numerous international design awards and his work has been featured in various publications and exhibitions and included in major museum collections, such as the Museum of Modern Art in New York and the Design Museum in London. Each object designed by Berge reflects his human and essential approach to design. His versatility allows him and his team to work in a variety of ways: from industrial design for international brands, to design and supply of custom-made objects for restaurants and shops, to the production of his own collections.

The opening tasting is kindly offered by Collemassari

On 12 and 13 November 2016, the exhibition is open only to visitors to the event BaroloBrunello 2016.
For further information: http://www.barolobrunello.it/it/barolobrunello-1-edizione-2016-montalcino-si-work-in-progress